Bow of fortune and Resolution crossbow

Thank you once more for still reading this blog.

I am still working on the tiles for my expansion Glistening Forge but today I have taken some time to remake two very special cards from the oficial expansions: the Bow of Fortune and the Resolution Crossbow.

These two weapons were firstly introduced in the Eternal Winter expansion and appeared again in the Forbidden Forest expansion. These cards are totally necessary as basic equipement for level 3 for the Heroes Mialee and Jozan.

This was discovered to be not enough for fighting the expansion's Monsters so in this expansions both Heroes received a new weapon almost exact to the one they already had but which make them recover 2 Spell Points instead on 1 when a star appears in the Special Die.

This upgrade was very necessary for Mialee, as her Armour Class depends on her Spell Points, but also for Jozan, who needs more Spell Points in level 3 to heal his comrades.

In my expansion Glistening Forge I wanted to include these two weapons too and now I have already managed to finish remaking them. 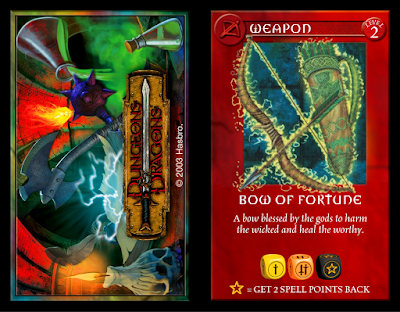 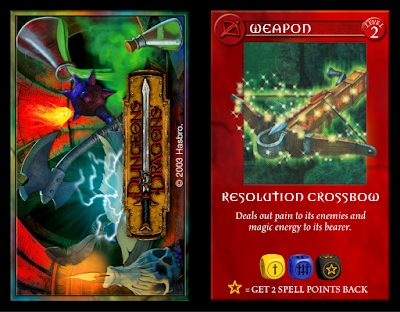 Thanks again for reading this blog. Stay tunned for more content in the following weeks :)